On May 15, 2015, Compassion & Choices filed suit on behalf of three Californians with terminal or advanced diseases and a physician asserting that the California Constitution and existing state law allow the medical practice of aid in dying. Medical aid in dying gives mentally competent, terminally ill adults the option to request a doctor’s prescription for medication they can take in their final days to end their dying process painlessly and peacefully, ending unbearable pain and suffering.

“Some dying people face unbearable suffering in their final days that even the best hospice and palliative care cannot relieve,” said Compassion & Choices National Director of Legal Advocacy Kevin Díaz, who also worked with death-with-dignity advocate Brittany Maynard. “As Brittany Maynard recognized, these people desperately need the option of medical aid in dying so they can die painlessly, peacefully in their sleep – and they need it now – before it’s too late.”

In conjunction with filing the suit in California Superior Court in San Diego County, Compassion & Choices released a new video featuring Christy O’Donnell, the lead plaintiff, who had a terminal prognosis of less than six months to live. She was a Christian, Republican civil rights attorney who lived in Santa Clarita and was a former sergeant in the LAPD. Despite receiving chemotherapy every week, O’Donnell’s physicians told her that she would likely die painfully within the next few months from lung cancer that had spread to tumors in her brain, spine, ribs and liver.

Watch the video below:

The plaintiff’s complaint is available here.

“The most likely way that I’m going to die with the lung cancer is that my left lung will fill with fluid, I’ll start drowning in my own fluid,” said O’Donnell in the video, which was recorded on March 4, 2015. “I spend an inordinate amount of time being afraid of the pain that I’m going to endure.  All of that time that my mind spends thinking about that, I am not living. I don’t want to die [but] I should be able to get a prescription [for aid-in-dying medication], have that peace and never think about it ‘til the day I’m ready to die.”

“The situation is urgent for terminally ill Californians like Christy because they cannot afford to wait for relief from unbearable suffering in their last days,” said Lynette Cederquist, M.D., a plaintiff from La Jolla who is a board certified physician in internal medicine as well as hospice and palliative medicine, and is a clinical professor of medicine.

Expedited review was obtained on behalf of Christy because her cancer had spread and caused her more pain and suffering each day, according to John Kappos, a Newport Beach-based partner in the law firm of O’Melveny & Myers LLP, who worked in conjunction with Compassion & Choices on behalf of the plaintiffs. “We are pursuing multiple legal theories to authorize medical aid in dying to maximize our chances of bringing immediate relief and peace of mind to terminally ill Californians like Christy.”

The second patient plaintiff was Sacramento resident Elizabeth Wallner, who had stage IV colon cancer that metastasized to her liver and lungs. She fought the cancer with 18 rounds of weeklong chemotherapy treatments that made her “mind-bendingly sick,” four surgeries to remove parts of her liver and colon, radiation, radio-ablation, and any other method that offered even the slightest hope of extending her life. Elizabeth’s family, including her 19-year-old son and her Catholic father, supported her end-of-life wishes, including the option of aid in dying.

“No one would want to live through unbearable pain,” said Elizabeth. “Quite frankly, one simply can’t understand it until they are faced with the reality.”

The third patient plaintiff was Wolf Breiman, a retired landscape architect from Ventura who was diagnosed with multiple myeloma, an incurable cancer of the white blood cells. Wolf and his wife, Debbie, were staunch supporters of end-of-life options for all Californians.

“I see it as an expansion of individual rights by giving people more autonomy,” said Wolf. “I am 87 years old. I’m OK with death. I just don’t want to go out in misery.” 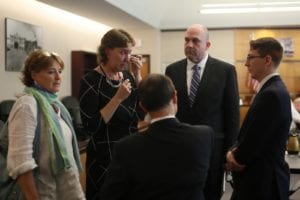 In June 2014, Christy O’Donnell, 46, a single mother, was diagnosed with terminal lung and brain cancer.

Christy and her only daughter, Bailey, had asked doctors to help end her dying process without unbearable pain so that she can die peacefully.

“I have endured excruciating headaches, debilitating nausea, being bed ridden due to fatigue, and suffered muscular skeletal pain in my head and neck despite the compassionate palliative care of my treating physicians and skillful use of available prescription drugs,” said Christy, a Los Angeles attorney and former LAPD officer. “The lung cancer will possibly cause me to die by drowning in my own fluids and no medicine exists that can relieve that fear or pain.”

Christy believed aid in dying should not be labeled “as a sin.”

“As a Christian, I believe it is not for me to judge someone else or try to limit his or her religious freedom,” she said. “Our California laws should not seek to prohibit our fundamental freedoms and should allow all people to die with dignity in California.”

Christy pledged to fight for end-of-life options until her last breath, just like Brittany Maynard did before her.

“Until someone can walk a mile in my shoes, it’s not their place to stand in the way of this option being available for me,” she said.

Tragically, Christy O’Donnell passed away on February 6, 2016 at the age of 47, prior to the enactment of California’s End of Life Options Act.

In March 2010, Elizabeth was diagnosed with stage IV colon cancer. The terminal illness had metastasized to her liver and lungs.

She chose to fight the cancer with chemotherapy treatments that made her “mind-bendingly sick.”

Prior to colon and liver surgery, multiple rounds of chemotherapy and the removal of part of her lung, Elizabeth spoke to her teenage son about her end-of-life wishes – including the option to request a prescription from a doctor to shorten her dying process painlessly and peacefully.

Elizabeth’s 19-year-old son, as well as her devout Catholic and Christian family, agreed to honor her wishes.

On July 18, 2017, Elizabeth died with the aid of a prescription written by her physician under California’s End of Life Options Act. Prior to Elizabeth’s passing, she was featured on an episode of 60 Minutes about medical aid in dying.

Wolf Breiman, a former landscape architect from Ventura, was diagnosed with multiple myeloma in 2008, an incurable cancer of the white blood cells. He became a U.S. citizen when he moved from Romania at the age of nine.

Breiman felt so strongly about the importance of end of life options that he switched doctors after his original one told him he did not believe in aid in dying, even if it was legal.