The State of Oregon, a physician, a pharmacist, and terminally ill patients argued against the Interpretive Rule. Compassion & Choices’ predecessor, Compassion in Dying, joined as Intervenors. 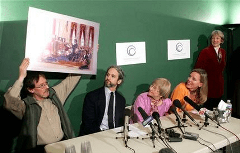 Lee v. Oregon would not be the last challenge to Oregon’s Death with Dignity Act.  On November 9, 2001, the United States Attorney General issued an Interpretive Ruling prohibiting the use of controlled substances for medical aid in dying. The Attorney General’s Ruling made it impossible for physicians to provide medical aid in dying to their patients, as the practice relies on the use of controlled substances.

While the outlook initially looked grim when the United States District Court ruled in favor of the Attorney General and placed a temporary injunction on medical aid in dying, the battle was not over yet. Gonzales v. Oregon was appealed before the Ninth Circuit Court of Appeals, and eventually escalated to the United States Supreme Court.

On January 17, 2006, the United States Supreme Court issued its decision, ruling the Attorney General’s attempt to intervene in medical aid in dying exceeded his authority.

“This is a watershed decision for freedom and democracy in the U.S.,” said Barbara Coombs Lee, president of Compassion & Choices. “It reaffirms the liberty, dignity and privacy Americans cherish at the end of life.”

Since the Supreme Court’s ruling in Gonzales v. Oregon, no further challenges have been made to the Oregon Death with Dignity Act. However, Compassion & Choices will defend any attack on the Oregon law, and will not stop until all Americans can live and die as free people, in dignity and according to their own values.

This case served as a national call to end-of-life care providers around the nation. Thanks to this verdict, facilities now recognize the importance of providing appropriate care. Facilities must share accurate information about what they provide, recognizing the consequences to both patient and provider when misrepresentations are made.